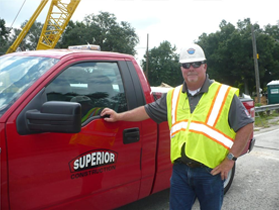 The Florida Department of Transportation (FDOT) contract is for $11.3 million, and the design-build project will take about a year and a half to complete. Gene Howard is the project manager, and Rick Hamilton is the superintendent.

“The existing bridge is due to be replaced, and we’re going to demolish the existing structure and replace it with a new structure,” Howard said. “We’re in a tight area next to existing homes, in some pretty nice neighborhoods, and when the design first came out, if the bridge had to be replaced, the neighborhood people wanted it replaced in the same spot, and pretty much sitting just like it does now. They didn’t want to change the alignment. So what we’ve done first is set up a 1,000 ft. long ACROW bridge for traffic to use temporarily The DOT owns the ACROW bridges. They supply the parts and we put them together. So we’ve got that installed, and now we’re moving over to the existing bridge.”

Kobelco’s Crane division is a global leader in the manufacturing of hydraulic lattice-boom crawler cranes, servicing the North and South American markets.